Why You Should Date a Girl Who Practices Yoga 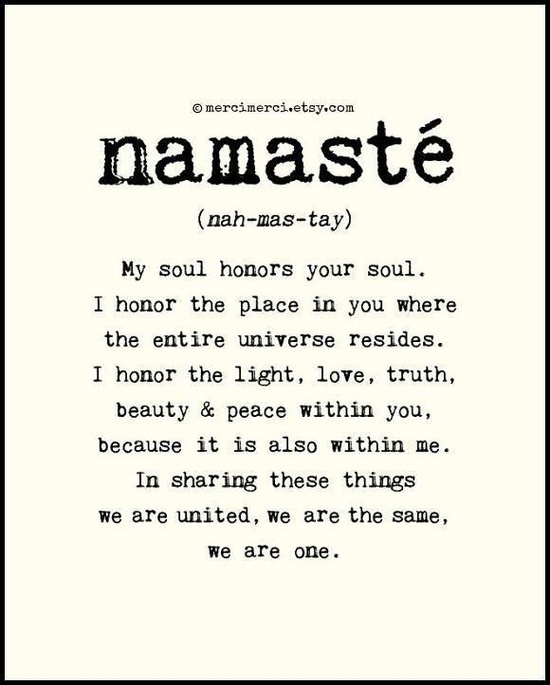 Ok, so this post should really be called “Why You Should Date a Girl Who is Addicted to Yoga,” but I thought as a title that was a bit extreme. But what can I say – I am a bit extreme. I am a yoga addict… addicts are a bit extreme.

Being the yoga addict that I am (and the neurotic daydreamer that I am, shhhh) I spent my entire yoga class yesterday evening thinking of things to add to this list and secretly dying inside because I couldn’t write them down until afterward.

By the end of the hour and fifteen minutes I had completely memorized all 24 of them and was quite proud of myself. Shows you how zen I am…

I usually am, I swear.

Anyway, here is why you, my lovely male readers, should…

Date a girl who is addicted to yoga:

1.  She is one bendy mofo. Let’s face it, girls who get their stretch on every day are incredibly flexible. This quality comes in handy for things like oh, I don’t know, picking something up when it drops? Reaching an itch in the middle of her back? And maybe a few other things too, if you’re into that kind of thing.

2. Her friends don’t suck. She surrounds herself with people who lift her up, love her unconditionally and don’t create drama. She has a posse of yoga buds (and non-yoga buds, too) who genuinely care about what is going on in her life and want to get to know you because you make her happy. Girls with good friends tend to be more confident, secure and content. Plus, cool friends mean lots of fun people to hang out with.

3. She isn’t afraid to be different. She is used to saying no to drunching on a Sunday afternoon or hitting the bars until 4 a.m. on Saturday because that might mean missing out on her favorite yoga class or being too hung over to enjoy it. She doesn’t have FOMO problems and is fully OK with a night in with her pajamas, a good book and a bowl of [vegan] ice cream.

4. She won’t become obsessed with you. She knows the importance of balance, and she has too many passions and interests to spend all of her time texting you asking what you’ve been up to every few hours. She cares about you, and she is excited to hear about your day, but she isn’t thinking about you all the time. Girl’s got her own thoughts to worry about!

5. She will never settle. She knows what it’s like to be entirely, soul-wrenchingly passionate about something. She has depth, and she understands that when you truly love something (or someone…) it excites you in a way that takes your breath away. She won’t stay with you if you don’t give her more butterflies than her super amazing yoga high.

6. Baby got back. You try doing chair pose, wide-legged squats and warrior poses every day and tell me you don’t start to get a yoga butt! Every true yoga gal has the booty to show for it, and she is proud of it!

7. She is spontaneous. She’s the kind of girl who sneaks out of work early to do something that makes her happy if the thought pops into her mind. She will drop her plans to go on a yoga retreat or fly to Costa Rica for the weekend if she gets excited about it. She understands that happiness comes first, and she will never let stress, work, or social obligations get in the way of that.

8. She is as ethical as they come. You will never have to worry about her sneaking around, being rude to your friends or lying about how she feels. She abides by the Yoga Sutras and understands the true meaning of: “Undisturbed calmness of mind is attained by cultivating friendliness toward the happy, compassion for the unhappy, delight in the virtuous, and indifference toward the wicked.”

9. She can hold her own in the gym. Ever heard of Chaturanga? If you think plank is hard, try holding Chaturanga for ten breaths and then we’ll talk.

10. She gives a mean back massage. She’s strong (see #9) and she ain’t afraid to show it. She is in tune with the body and she understands the importance of anatomy and alignment. She knows soreness like it’s nobody’s business, and she can fully perform a good rubdown.

11. She frickin’ loves food. A yogi understands the true meaning of “strong not skinny” and isn’t afraid to dig into some grub in front of her man. Yes, she may be the green juice-lovin’, raw veggie-eatin’ type (or maybe she’s not!) but Lord knows she will be ravenously hungry after that power vinyasa sesh.

12. She is always up on the best indie, folk and pump up music. She has experienced the miraculous sensation of being one with a really kick-ass song in the middle of a really kick-ass class. She has powered through Wheel Pose to Eminem and basked in the glory of Savasana while blissing out to Dave Matthews. She loved “Blurred Lines” before the video went viral, and she blasted Mumford & Sons, The Lumineers and The Head and the Heart in her car before they were Coachella headliners.

13. She understands the importance of consistency. She has experienced the dreaded “first day back in the studio after a week of downtime” and knows that all good things in life take work, every day, and relationships (and yoga poses) are not something you can expect to be great without putting in consistent effort.

14. She has been through something. People don’t just fall head over heels in love with yoga and its teachings if they are not searching for a greater purpose. People find yoga, like any great spiritual practice, when they are in need of meaning and guidance. The true yogi dedicates so much of herself to her practice because she knows what it’s like to be in a difficult place, and she is more compassionate and worldly because of it.

15. She knows she isn’t perfect, and she doesn’t care. The girl who is addicted to yoga knows that nothing is perfect, and she has learned to hold people, and herself, to a realistic standard. She values her life and what she has rather than worrying about things she does not have. She doesn’t deal with people who don’t make her happy, and if there is something she is unhappy about with herself she works on it. Yoga girls are confident in their bodies and their relationships.

16. She doesn’t do drama. She is too busy focusing on things she loves and accepting others for who they are than dwelling on shit that gets dramatic. If she doesn’t like something you’re doing, she will tell it to you straight. (Refer to the Yoga Sutra in #8).

17. It isn’t hard to make her smile. All you need to say is, “Sure, I’ll try that yoga class with you,” or “I tried that pose you showed me to stretch out my shoulders,” and she will basically leap with joy. That’s not to say that her wants are simple, because they’re certainly not (remember #5? She will never settle!), but putting an effort into her interests will mean the world to her. Plus, if you catch her while she’s still floating on her yoga high, pretty much anything sweet you say or do will make her smile.

18. She is independent. She has learned that in order to be at peace, she must have a loving relationship with herself first. She knows that happiness comes from within, and she’s cool with being her own best friend. She enjoys spending time by herself, and won’t give you shit for trying to have some bro time.

19. She has a stocked bookshelf with awesome teachings. She drops Sanskrit words like they’re part of the English language and she is well-read on yogic philosophy, the art of happiness, holistic nutrition and the chakras. She won’t bore you with it if you don’t want to hear it, but it’s cool to know that your girl is swimming in philosophic thought rather than reality show madness or inner-girl-world friendship drama.

20. She is crazy-happy all the time. Sure, she’s not perfect, but she has endorphins flowing through her body on a regular basis and knows when to excuse herself for a good meditation sesh if she’s feeling uptight. She dedicates a portion of her day, every day, to something that she absolutely loves – who wouldn’t be happy in her shoes? (Or, technically, without shoes!)

21. She isn’t afraid to laugh at herself. She knows what it feels like to fall down in public, repeatedly, because she has unsuccessfully tried to launch herself into a pose she isn’t ready for. She doesn’t take herself, or the world, too seriously, and that can be extremely refreshing.

22. She is one with her emotions. She deals with her emotions on a daily basis in a healthy way. She has experienced the emotional shit that comes up in pigeon pose, or any extended hip opener for that matter, and she has let her emotions flow through her so they won’t come out and bite you in the ass later on.

23. She lives in the moment. “Yoga teaches us to live in the present moment. The only place where life exists.”

24. She actually knows what this means:

There you have it, peeps! Boom. 24 good reasons to date a girl who is addicted to yoga.

If you are a yogi and you don’t identify with all 24 of these things, that’s still cool. I’m sure you have a whole other list of 24 you could pile on top of it. That’s the beauty of being a yogi and a passionate thinker in general. It is an entirely creative, personal and independent path and you find what makes you happiest from your practice and go from there.

Now, go find a hot yogi and take her on a date!!

Question of the Day: Which number on this list do YOU identify with most? 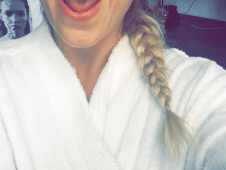 Everyone Go Grab a Copy of SELF Magazine, Because… 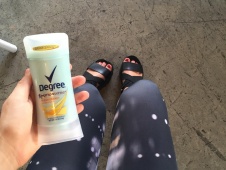 The Top 5 Ways I Like to Stay Active! (+ Degree at Walgreens) 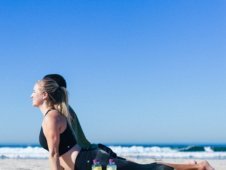 My Go-To Workout Routine When I Don’t Have A Lot of Time…!

3 Easy Yoga Poses to Do At The Office